you know it's been awhile.
so I read a single girl in New York's blog today - and - I got a phone call today...both got me thinking. Thinking a lot actually.
I hate talking about boys and relationships, I always have. I don't know why, but it feels like a sign of weakness to me. The whiney single girl, who can't find the "right" guy and her heroic stories about dating in this mad world. There is the side of me that likes to play it off, like "I dont' need no stinkin' man to be happy" which I don't, but I must admit I think about it more and more frequently.
so today I get a call from an "ex", like as in a "we used to date and have sex for over a year" ex. He was much older than I, not in a sick way, but I have always been one to like older men. The young, hot, crusty haired, frat boy types NEVER did it for me. A-n-y-w-a-y, so the ex calls and it seems initially like he is wanting to see how I am doing, which in the past has usually meant, "I am single momentarily and would like to get laid" or at least that is what I assumed it meant, and for the last four years, I have not seen him, nor had a drink with him, gone to dinner with him, nothing. Let me just say first, he was a very handsome, very successful man...had that tall, dark and mysterious thang' goin on, and when he first approached me I was flattered and intrigued. All around, he was a good guy, decent guy... had a good family, great house, never been married, no kids. Of course he liked to stare at himself in the mirror in his briefs, and was a bit pretentious with his clothes and cars, but...he was thoughtful and kind. He talked every now and then about marriage and kids, not necessarily with me, but we talked about how we both felt and what we both wanted. He was almost ready, I was not.
Today he told me he got married and has a baby on the way. He met her, they dated for a year ( A YEAR?! What's a year....not enough time to find out someones crazy...or...maybe when it's "right" you just know) he took her to Rockefeller Center in NY, got down on his knee and proposed. Now, they are expecting a child.
It hit me like a ton of bricks, I felt like my chest was tightening. It wasn't because I wished it was me, but I did wonder...if that is why he called. Is it that simple, you meet, you mate, and you procreate, you just sort of make that commitment to grow together - YOU JUST DO IT, and hope for the best and make the most out of it? Or does everyone really have that gut-wrenching, heart-pounding, earth-shattering LOVE that I think LOVE should be? Do I expect to much? Did I expect to much? Am I thinking too hard about this right now?

I am with someone now. Someone I love more than I ever thought I could love someone, besides my daughter, but...but...but... there's always a "but" with me. I am fully aware that I have "intimacy issues" (and I don't mean in the bed) and I am not the type of girl to pursue, push, or make ultimatums. I like my space. And I wonder how long I can keep saying that? Thing is, the guy I am with now knows and appreciates this and loves me still, loves me more than anyone ever has...expresses it more freely then anyone ever has...looks at me like no one else ever has...

but I know there's a chance we'll never get "there"...I just KNOW, but I am too scared to let him go, and it will definitely be something I have to do...I will have to be the one to walk away. Why do I think about walking away, is that in itself a sign, or is it my old fears creeping back and ruining another good thing?

sometimes I wonder if it is just that I "recognize" love now, and am ready and able to let go more freely, and wonder what I may be missing out on...am I missing out?! I just feel like there is so much out there, and I am not giving myself a chance.

Maybe it's just those damn jewelry commercials, where the guy slips the necklace on her neck when she's sleeping - or - in her hand on the snowy car ride home... damn them!

Hey Katie.
Yeah, I know what you mean by the stupid jewelry commercials. Snowy car ride home...really?! Anyway, in my humble opinion, you really shouldn't think about it so much. Love is what it is and no one has control over it. If you walk away, you walk away. If he walks away, he walks away. If you stay together, you stay together. I really don't feel that we have the choice in this matter. I know what love is like because I've felt it. Its the most amazing feeling in the world and everyone should experience it. Just enjoy it while you have it. Cheers.
~Jason

Noooooooo don't do it Katie...(lol) I could write a book on love and marriage. Everyone wants love and most a perfect mate & marriage but people do change (depending on their circumstances and environment and who they hang around with at work influences them, especially if most of your friends are divorced guess what? Close encounter with death, control freaks, stress, your mate one day becomes Bi-Polar and is determined to divorce you, whatever.) Their goals and your core values change(What was once important (marriage, intimacy, fun family core values, vacations exchanged for other goals like independence & financial security) Not to mention people do not honor long term commitments anymore because everyone has this disposable society mentality...I think people change once they get married (not sure why?) some turn control freaks which explains why so many relationships fail and people live together. They want the best of both worlds without long term commitment nor strings attached. You said it yourself you don't need a man.(umm..well maybe just part-time)I hear ya! Society is against marriage which is sad and I hear so many people say they feel trapped in their marriage which is sad. Bottom line is love a feeling beyond words and is always unconditional. When you find someone they will really mess you up (your head & heart not to mention making your body tingle all over and make you do really stupid things which is good. It makes you so vulnerable it makes you sick but such is life it wonderful and OMG does it hurts when it fails but billions do it everyday and seek this utopia again and again. C'mon and admit it we are all suckers..:o)
Luv ya..
T

"you meet, you mate, and you procreate, you just sort of make that commitment to grow together - YOU JUST DO IT, and hope for the best and make the most out of it?"

That's what I did.

"does everyone really have that gut-wrenching, heart-pounding, earth-shattering LOVE that I think LOVE should be?"

That's what I got. Eventually. Thankfully. Not that I didn't love before the gut-wrenching stuff. I did. I don't believe love IS that feeling. It is what we do. We make a commitment. We do things for each other. We support each other. We have common goals, beliefs of what we should be to each other and others. We change (hopefully for the better)and grow together. We annoy each other. Sometimes it gets tough and we simply tolerate each other. Sometimes we make mistakes and hurt each other so deeply and we have to forgive each other. And it's really hard. That's when love saves you. That's when you realize being without that other person would be worse than not forgiving them. Then you get back to the joy and it's even better.

I never get jewelry from him. He knows I'll just lose it. 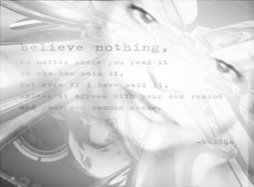 When I do good I feel good. When I do bad I feel bad. This is my religion.